I gotta say, I was pretty intimidated.

When Rebekah told me that she wanted me to write a 30,000-word book, I pretty much thought, yeah, that’s impossible; there’s no way that I could write an entire book.

Even as I worked on the book (and frankly, even when I got like halfway through it), I remained pretty convinced that it was going to take 7 to 35 years to actually finish it.

I kind of felt like that Greek guy who endlessly rolls the rock up the hill over and over. In my case, 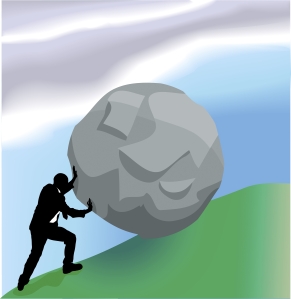 I was so deep in the writing process, so enveloped by each and every word, that I wasn’t even sure the mountain had a peak that I could reach. I was just grinding away in darkness, working on Chapter 4s for an endless amount of time. Unlike Sisyphus (and I don’t mean to make fun of Sisyphus; I really do feel bad for him), I finished writing the book eventually.

Honestly, that’s what keeps you going most of the time. The idea that you will have written an entire book is a pretty exciting one. I would set tiny goals for myself, move a little bit at a time, and one day, I figured, I would finish. And to be able to look back and say “I wrote a book” was something I imagined would be really cool. And now, I’m really, truly, almost done. Sometime next year, there will be a book with my name on the cover. And that’s cool. I’ll admit that. I’m really cool!

But, you say as I pat myself on the back for way too long, what does that actually mean? What did it take to actually write a book? Let me explain my process.

The book I was writing is called “So You Want to Write a Screenplay,” which is an adaptation, so to speak, of an older Atlantic book called “The Complete Guide to Writing a Successful Screenplay.” Effectively, my task was to rewrite this older book about screenwriting for our young adult audience in a way that could make storytelling and screenwriting easy to understand for anyone who reads it.

I started the whole process by seeing what I had. I needed to look through the old book and decide which topics should stay, which should go, and which we might need to add into the new edition. It pretty much went, oh, there’s a chapter on outlining. That’s important. That should stay. There’s a chapter on structuring your story and emphasizing the important parts of your story. We could condense those into one chapter. There’s a chapter on “How to Catch a Hyena in the Wild.” Probably don’t need that one! (Just seeing if you’re paying attention!)

After outlining the table of contents for the new book, I started the “real” writing process. I’m sure everyone might do this differently, but here’s how I went about it.

I’d open the old manuscript on the left side of my computer screen and the new manuscript on the right. Then, I would read a paragraph or full section from the old manuscript. Each “main idea,” whether it was from one sentence, one paragraph, or one whole section, would then get rewritten in my own words into the new manuscript. I always tried to make things more fun to read and updated some of the older movies used as examples to make myself sound more hip and current (although I kept some old examples, too, because history and the context it provides is important!).

Step Two: The Most Important Stage; AKA Rewrites.

After I got the words on paper, I would move to this stage. Basically, I would hit the ol’ “Maximize” button on the manuscript and make sure I was only looking at that. Then I would rewrite pretty much every line without looking at the first draft. This was my way of trying to make sure I was maintaining the spirit of the original idea but writing almost entirely in my own voice and words. It also becomes really clear at this stage when there are sections you can cut out or when there are concepts that desperately need a system update.

Step Three: Read It Back.

After this second stage, which I would say is the most difficult and substantial, I like to go back through a third time to read everything out loud and make sure it all flows well and sounds pretty good. Still, I won’t catch every mistake, and I won’t notice every poorly worded section.

Step Three-and-a-Half: Send It to the Editor.

That’s what fresh sets of eyes are for! Because after this point, I will send things Rebekah’s way, and she’ll check it all again to make sure it looks clean and fits in with the young adult style.

This is going to sound incredibly reductive, but that’s pretty much it! It takes a long time — or, at least, it took me a long time — but those are all the steps. We’re going back through the book now to give it one more big look-over and adding in a couple fun sections, but for the most part, the methods and madness I just described are pretty much how it went down.

Sometimes, the writing is easy, and everything feels like it’s flowing smoothly. Other times, you feel like banging your head on the keyboard, and you just have to step away and do something else, whether it’s working on a different project, talking to people around the office, or running around in circles outside until writing sounds appealing again (trust me; in Florida, that doesn’t take long).

As someone who’s never done any project approaching the magnitude of an entire book, I felt very often like I would never finish. I felt like I was probably writing more slowly than anyone who had ever written a book before ever had, like I wasn’t going to be good enough for the whole thing to work out in the end, like where was the end anyway, I’m still on Chapter 4.

But eventually, the light at the end of the long, dark writing tunnel appeared, and now I’m re-adjusting my eyes to the light. And you know what? I wrote an entire book. That’s pretty cool! 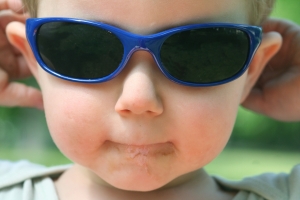 Get in on the action

Are you creative or excited about reading and writing? We have so many ways that you can get involved including internship possibilities and a chance to be featured in our books. Contact rsack@atlantic-pub.com to get in on the action!
%d bloggers like this: